The $1680 level has been important many times over the past few years, the fact that we broke it the other day was a big deal. We jumped over, but fell short of this 50-day EMA, which sits just below a longer-term downtrend line. For this reason, I think it’s only a matter of time before the rallies fade, especially if we start to see the US Dollar regain strength.

Speaking of the US dollar, you need to pay close attention to the interest rate market, which continues to show strength. The CPI figure to be released on Thursday will be crucial, as it is by far the headline of the week. After all, everyone pays close attention to the Federal Reserve and what it is going to do with monetary policy. At this point, it is likely that we will see the Fed take center stage and therefore whenever there is an inflation figure, the US Dollar will move accordingly.

Due to Thursday’s announcement, it is possible that we will see a slightly higher gold market over the next 24 hours or so, but it is at this announcement that we will see a big move. If we break above the top of the downtrend line, it opens the possibility of an attempt to reach the 200-day EMA, which is currently around the $1775 level. That would necessitate seeing a lower CPI figure, and so people are betting that maybe the Federal Reserve will pivot or at least slow down its rate hike cycle. This is all about the Federal Reserve and has almost nothing to do with anything else at this point. In fact, you could probably say that about most financial assets today. I don’t see that changing anytime soon so you need to pay close attention to these returns. 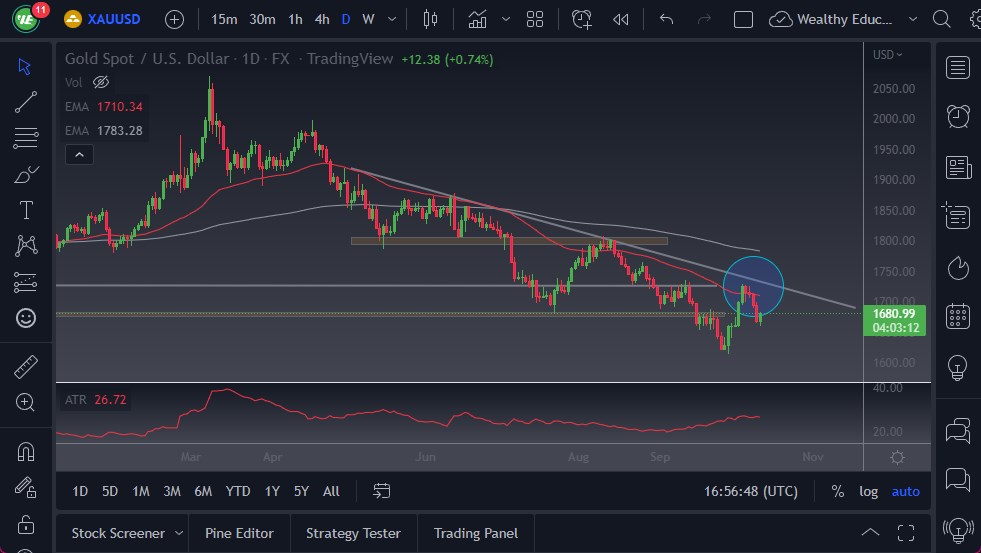