Investing in the stock market can be risky business and an easy way to lose a lot of money quickly. However, the potential for higher returns than those offered by more stable investments is an attractive proposition for many. This is especially true when interest rates are at such a low point.

I spoke with part of the team behind a new investment fund focused on 3D printing to learn about opportunities for investors and how experts pick stocks.

Ark Investment Management LLC recently launched an investment vehicle focused entirely on 3D printing: “This is a global equity ETF designed to replicate the total 3D printing index owned and operated by ARK. It currently holds 40 equity stakes and rebalances quarterly,” said Tom Staudt, Ark’s director of product development. “The purpose of the fund is to provide direct access to investment in the 3D printing industry,” he adds.

Diligent investors should conduct research to identify undervalued companies or growth opportunities. It requires both a particular skill set and a fairly substantial investment of time. A professional investment manager can perform these tasks for you, for a fee of course.

Besides research, fund managers aim to add value in other ways; reducing risk through diversification. Rather than placing all their eggs in one basket, investors could buy shares of multiple companies. Then, if a company’s stock price drops, it’s not that problematic.

Stocks of individual companies often move in a wide range of prices, displaying what is known as volatility. Volatility can be halved with a portfolio of 10 companies, and the standard deviation of returns continues to decline, albeit at a slower rate, as more firms are added.

However, portfolio diversification is not always practical for the retail investor. This is partly due to the transaction costs involved. Buying and selling shares incurs fees from the broker, and these fees will represent a higher percentage of the total value when the sums involved are low.

What is an ETF?

An exchange-traded fund (ETF) is a way for an investor to access the benefits of a diversified portfolio. Rather than buying shares of multiple companies, the investor buys shares of the ETF, incurring only one transaction fee. The ETF uses the investor’s money to buy assets in a particular category; it can be commodities, bonds or stocks of companies in a specific industry, such as 3D printing. Additional benefits include the favorable tax treatment of certain ETFs. ARK’s 3D Printing ETF is listed on the BZX Exchange, the largest exchange for global bat markets (BAT), under the PRNT ticker.

“We have been researching 3D printing for some time and looking at the industry as a whole. As companies appear in our searches, we add them to a large list that becomes our 3D Printing Index Universe,” says Catherine Wood, CEO and Chief Investment Officer. Wood founded ARK in 2014 and was previously the manager of investment assets valued at over $5 billion for AllianceBernstein.

“We only invest in breakthrough innovation. Our research begins when we identify a new general-purpose technology platform,” she says. Indeed, “you can innovate on top of platforms, and technology platforms tend to follow a decreasing cost curve which then drives unit growth. We believe that 3D printing falls into this classification.

Tom Staudt explains the process of including a stock in ARK’s 3D printing ETF: “The criteria is ARK’s research on companies involved in the 3D printing ecosystem. Research determines the company’s trajectory and direction, and whether or not it is included. There are also liquidity and minimum market capitalization criteria.

Shares of some publicly traded companies may trade less frequently than other companies. This means that it may be more difficult to sell or buy shares if a counterparty on the other side of the transaction is not immediately available. In such situations, the company can be said to be illiquid.

Nano Dimension is an example of a publicly traded 3D printing company that is currently not included in ARK’s 3D printing ETF. Staudt says, “They were included in our research universe,” but did not meet market capitalization and liquidity criteria. “As they grow and become more liquid, they could be included in the future,” he adds.

These investment funds can be classified as assets or liabilities. A passive index tracker simply replicates a benchmark index, such as the NASDAQ or FTSE 100, and holds assets or stocks in the same proportion as that index. Active ETFs aim to produce above-market returns through the skill of the fund manager in asset pricing.

I ask Wood about recent reports that 3D printing stocks are overvalued: “One of the things we like about launching the fund today is that we’re very focused on S-curves. S-curves are starting to go through a hype phase, which 3D printing went through in 2013 and maybe early 2014, there were a lot of mergers and acquisitions during that time. We believe 3D printing is in the saddle phase of the adoption curve. Tasha Keeney, Investment Analyst at ARK, adds, “If you look at the end-use product market, which we believe is the largest addressable market for 3D printing, with a total value of around $500 billion dollars, this market is penetrated at less than 1%.

ARK expects the 3D printing market to reach $40 billion by 2020, nearly double the estimates of independent consulting firm Wohler’s Associates, Inc. Tasha Keeney explains how ARK reached this figure: size the market. We take a look at the different addressable markets that 3D printing can impact. Keeney says these markets are “end-use products.” Based on these addressable markets, “We say okay, well, what is the penetration rate we expect for 2020? That’s where we get our estimate of $40 billion. McKinsey predicts a market of 3D printing by almost half a trillion by 2025. “That’s because they expect 3D printing to be integrated into the industrial manufacturing process,” says Wood. still a relatively small fraction of the $12 trillion global manufacturing industry.

I ask ARK what they think of the tech hype in 2013/14, though mentioning 3D printing could result in a tremendous boost during a company’s share price. “It was too much, too soon and we’ve had a jolt since then. We have a clear delineation in the market between industrial and medical names on the one hand, and consumer names on the other,” says the CEO . 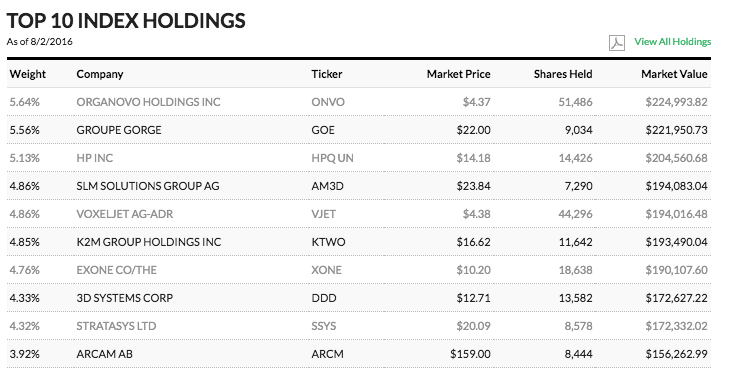 As illustrated last week, in 2016, 3D printing does not guarantee that a company’s stock price will perform well. “One of the reasons for the shortfall [across the 3D printing industry] was the restructuring and disruption that needed to take place in the consumer side of the market,” says Wood.

But that wasn’t the only factor that rattled market confidence and the performance of 3D printing stocks. “The 25% rise in the dollar that made American manufacturing uncompetitive in the global market,” also played a role. Wood continues, “Ironically, that’s one of the reasons we think people are revisiting 3D printing because it’s going to reduce the time and cost between design and production and it’s the antidote. to what has happened to the dollar in recent years.

Investing is never without risk, and investments in advanced technologies are undoubtedly more risky than others. “Nanotechnology in the 1990s was the next big thing and it never happened as a group of separate stocks, but it does happen within organizations, especially industrial organizations. It’s a risk that we are constantly reviewing,” says CEO Wood.

However, despite the recent crop of “3D printing is dead” articles, ARK is confident that this is far from the case. Wood explains: “What I find interesting is the number of mentions [of 3D printing in earning reports] skyrocketed until 2013, peaked there for a while, then dipped slightly. And just recently in the last quarter, [mentions have] reached new heights. As an investor, I’m watching this and I think it’s a signal that something is picking up steam here.

As ARK investment analyst Keeney puts it, “It’s hard to say something has peaked when it hasn’t even really started yet.”

How sustainable finance and impact investing professionals can walk, not just talk during hiring processes