This famous line makes its way into the current play as Russia’s invasion of Ukraine opens a Pandora’s box for agricultural producers and consumers around the world.

The supply disruptions come at a crucial time when the world is in the midst of an environment of high energy and input costs that has lasted for months, playing on inflationary pressures and forcing governments to take policy measures such as export restrictions.

Along with this, prolonged adverse weather conditions in major grain and oilseed producing countries have worsened the production outlook and increased pressure on the already tight supply pipeline. 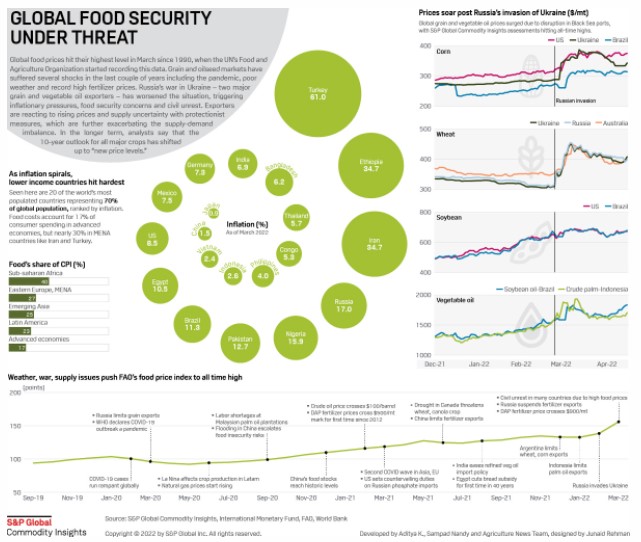 These multiple factors indicate that the prices of major global staples such as wheat, rice and maize are likely to remain at high levels, which will eventually make it more expensive to put food on the table.

The countries exposed to the suffocating threat of food inflation are developing economies, mainly those that are highly dependent on agricultural imports, such as African countries and major buyers such as Egypt and India.

The Food and Agriculture Organization of the United Nations has already issued warnings with its benchmark food price indicator which broke all records in March, forcing analysts to predict a bleak outlook for global food markets. While the food index corrected slightly in April, global food prices are still up 30% from their level a year ago.

Both Russia and Ukraine play a major role in agricultural markets. In addition to supplying around 25% of global wheat exports, Ukraine and Russia are also key sources of sunflower oil, corn, fertilizer, barley and sorghum.

As the Russian-Ukrainian war blocks these supplies, pressure has increased on the prices of agricultural and food products.

The war has devastated Ukraine’s main agricultural ports, but exporters are trying to get volumes through rail networks, even if they are not big enough for the capacity of ships. For example, a grain cargo of a train could only carry about 70 tons of grain, the railway capacity being supposed to deliver 200-300 such wagons per day to neighboring countries.

Russian wheat exports, on the other hand, may not be disrupted on the scale of Ukraine’s, with major trading partners such as China likely to continue importing, according to S&P Global Ratings. However, as major buyers such as Europe shun Russian trade, expectations remain high for some reallocation of global wheat trade flows.

Egypt, the world’s largest wheat importer, has faced challenges in securing wheat supplies at a time of record prices and unavailability of grain from the Black Sea region.

History tells us that exorbitant prices of staple foods such as bread have caused civil unrest in several countries.

The world found itself in a chaotic situation in 2007-08, when inflation hit consumers’ pockets hard as prices for agricultural products soared, triggering protests in countries like Egypt.

About four years later, annual food inflation in Egypt reached 18.9% in 2011, leading to a new round of protests mirroring the “bread riots” of 1977. The 2011 protests ultimately toppled Egypt’s Mubarak regime , 30 years old.

Looking back to 2022: just weeks after Russia invaded Ukraine, Platts estimated that the Russian wheat benchmark had risen around 46%, hitting an all-time high of $455/tonne at one point in March, according to data from S&P Global Commodity Insights.

As wheat prices soared and supplies were choked, Egypt, for the first time in 30 years, capped prices on unsubsidized bread in March.

According to the United States Department of Agriculture, global wheat stocks in 2022-2023 are already expected to fall by 10 million tonnes compared to the average of the past four years.

India and Egypt in the same boat?

India, the world’s largest importer of vegetable oils, is doing better than Egypt, but may not emerge unscathed from soaring commodity prices.

The South Asian country was directly hit by high energy import bills, agricultural input costs and exporter protection measures, forcing its central bank to raise its key rate sharply earlier in May, a first of its kind for several years.

Predicting a bleak outlook, India’s central bank governor, Shaktikanta Das, said “spiking fertilizer and other input costs are having a direct impact on food prices in India” and that “pressures food inflationary inflation is likely to continue”.

CFR India West Coast crude palm oil prices have soared 224% over the past year, according to data from S&P Global valuations on May 10.
With sunflower oil supplies from Ukraine and Russia already out of the equation, Indian buyers could be engaged in a grueling battle to secure alternative supplies and overcome price hurdles.

On the other hand, as India tackles its inflation problems head-on, its government is also trying to make a major inroad in the global wheat markets as it aims to fill the wide supply gap left opened by the Black Sea region. But this development could weigh on its stocks and possibly further aggravate food inflation.

Cairo has already signed an agreement to buy wheat from New Delhi, at a time when India’s trade expectations are brighter, achieving around 9-10 million tonnes of wheat exports in the 2022 season- 23.

Elsewhere, it’s not rosy either

Even affluent economies like the United States, Australia and France have faced challenges in tackling inflation, with rising food prices playing a major role.

The United States, facing the highest inflation rate in 40 years, is expected to see high prices for staples such as bread, meat and milk in the near term, analysts said. Australia also took monetary action for the first time in 11 years to rein in inflation, driven by soaring food prices. Food inflation in France hit 3.8% in April, a stark contrast to the level a year ago, when it was negative. The French agency INSEE expects food prices to remain at high levels compared to the previous month.

Global inflation is expected to continue to rise in the coming months due to the war in Ukraine, tensions in supply chains and continued upward pressure on energy, commodity and commodity prices. food, according to ING.

Meanwhile, rising costs of agricultural inputs such as fertilizers also mean that farmers in countries like Australia and Brazil would try to navigate the high price environment by switching or planting crops that require less of fertilizer use.

A major indicator of what could be in store for agricultural markets ahead is the forecast for wheat prospects in Australia, currently the world’s third-largest exporter. The size of Australia’s wheat crop for 2022-23 has been reduced by 4% on the year as farmers weigh on rising energy and input costs.
Source: Platts